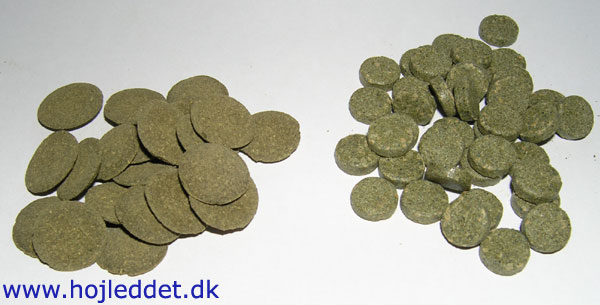 Food for catfish and corys.

Catfish pills in various forms are a very suitable food for catfish, corys and other aquatic animals. The pills sink to the bottom and dissolve and the catfish have a better chance of getting something to eat compared to regular flakes that mainly stays at the surface. However, large fish like, for example, Lake Malawi cichlids likes to grab the whole pill before it reaches the bottom, but it can be prevented in part by waiting to give the pills until after the light is switched off - the catfish will easily find them if they first reach the bottom.

If fed to other fish such as guppies, they can usually be stuck on the glass side, where the fish will then nibble off the pill as it dissolves.

Some have a notion that Ancistrus, in particular, acts as the garbage man of the aquarium and that they can live by surplus food alone, but this is very wrong. They must have both frozen foods and good flakes, as well as catfish pills and vegetables such as a slice of cucumber now and then.